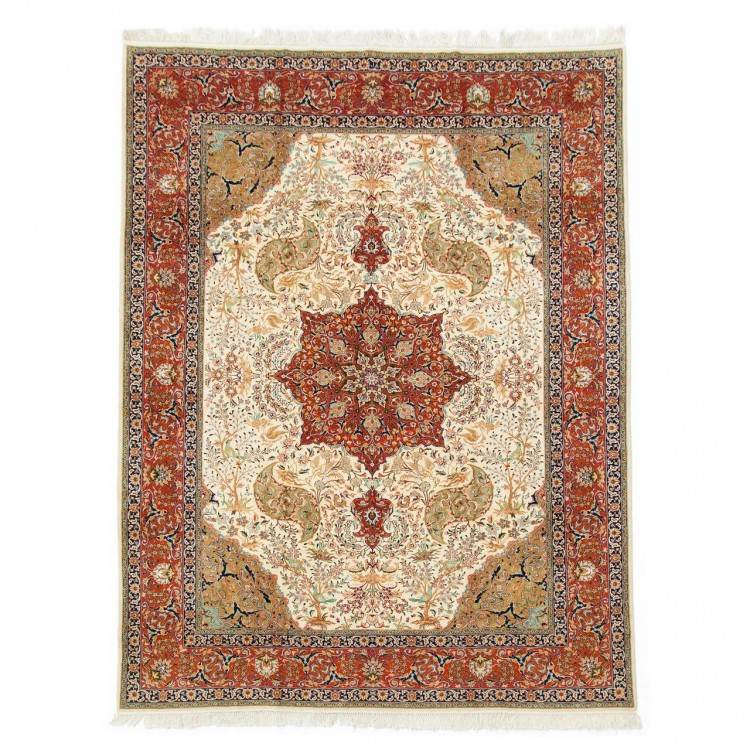 This product is no longer in stock
Warning: Last items in stock!
Availability date: 08/17/2019

Nobody has posted a review yetin this language
Rate it

This beautiful carpet is from Tabriz. capital of the north eastern Iranian province of Azerbaijan, has for centuries enjoyed a great reputation as a center of Oriental culture. The vicissitudes of its history, its development from a naturally favored oasis at the foot of the volcano Sahand, to today's commercial Centre, and descriptions of its artists and craftsmen could fill many volumes. Rugs and carpets of Tabriz are Iran’s best urban products from past to present.

Spandrel Medallion layout first used for the decoration of leather book-covers, it is one of the most beautiful and popular Iranian designs. It has been used in carpets since the 16th century. The medallion design is usually round and sometimes elliptical. One-fourth of a medallion design appears at every angle of the carpet’s main body.

Dying method of material of this carpet was traditional and all dyes which used were natural dyes. Colors of natural dyes are softer and more natural looking and longer lasting than their synthetic counterparts. Sometimes natural dyes contribute to Abrash. Since all-natural dyes are not chemically or synthetically based or fixed, no two dye lots can ever be exactly the same.

Some examples of natural dyes are:

Animal Dyes: the most important of these is cochineal and in earlier times, Indian lac, both obtained from insects. A purple dye obtained from snails was Important in ancient times.

In addition, however, colors will vary with the wool quality, e.g., its fat content, as well as with the chemical composition of the water which is used for preparing the dye baths.

Be the first to write your review !